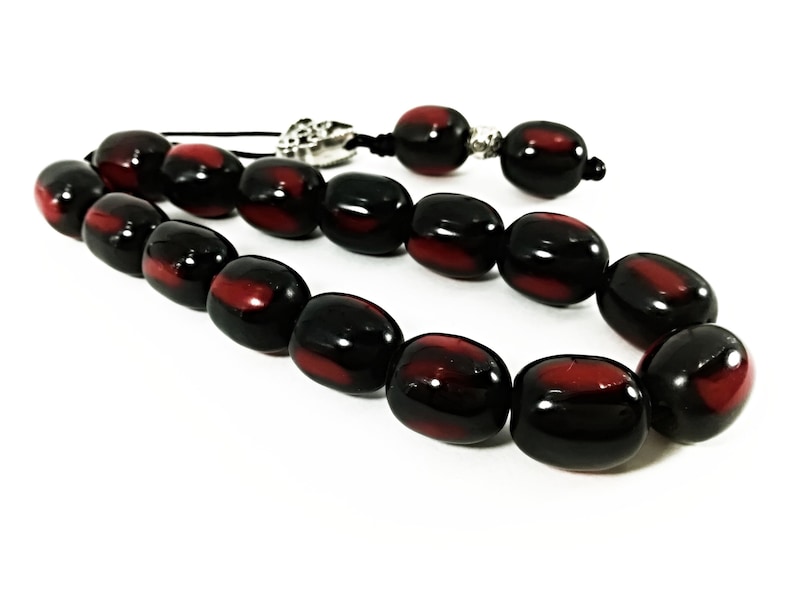 Beautiful greek komboloi with black and red colored beads and silver details. The komboloi consists of 13 + 2 barrel shaped beads and it measures 9.5#39;#39;/ 24 cm in length. It is a classic piece and it would be an ideal accessory for men and women of any age. Playing with a komboloi is the perfect stress relief or an alternative way to quit smoking by keeping your hands busy.

-Unique and original birthday, anniversary or even Christmas gift!

Worry beads or kombolói, kompoloi (Greek: κομπολόι, IPA: [ko(m)boˈloj], bead collection; plural: κομπολόγια, IPA: [ko(m)boˈloʝa]) is a string of beads manipulated with one or two hands and used to pass time in Greek and Cypriot culture. Unlike the similar prayer beads used in many religious traditions, including the Greek Orthodox komboskini, worry beads have no religious or ceremonial purpose.

Worry beads have several uses in Greek culture, including:
-relaxation, enjoyment, and generally passing the time
-as an amulet, to guard against bad luck
-used by people who wish to limit smoking
-as a mark of power and social prestige. This is especially true in the case of expensive worry beads made of silver or amber.

Worry beads may be constructed from any type of bead, although amber, amber resin (such as faturan), and coral are preferred, as they are thought to be more pleasant to handle than non-organic materials such as metal or minerals.
Greek worry beads generally have an odd number of beads (often one more than a multiple of four, e.g. (4x4)+1, (5x4)+1, and so on, or a prime number, (usually 17, 19 or 23) and usually have a head composed of a fixed bead (παπάς quot;priestquot;), a shield (θυρεός) to separate the two threads and help the beads to flow freely, and a tassel (φούντα). Usually the length of worry beads is approximately two palm widths.

Worry beads can be handled in many different ways:

-quot;Quietquot; method
The most common are a quiet method, for indoors, and a noisier method that is acceptable in public places. The most common quiet method is to start at one end of the thread or chain, near the shield, and to pull the thread forward using that hand#39;s thumb and the side of the index finger until one of the beads is reached. Then the cord is tipped so that the bead falls and hits the shield. This is repeated until all the beads have been tipped and then the user starts over.

-quot;Loudquot; method
The second, louder, method is to divide the beads into two groups. On one end is the shield and a small number of the beads. On the other end is the rest of the beads. Where the two threads are empty, that space is laid between the index and middle fingers. The hand should be in a position where the palm is facing the torso. Then the end behind the hand is swung up and forward so that it hits the other beads, making a noise.
The threads are then switched back into the space between the index and middle fingers by holding the threads between the thumb and the side of the index finger. This is repeated rhythmically, creating a louder clicking noise than the quiet method. Another method is to hold all of the worry beads in one hand and roll them against each other, creating soft clicking sounds.

-As ritual
It is also superstition in certain Greek communities that husbands-to-be, on their wedding night, will perform a quot;Worry bead ritualquot; involving rapid back and forth movement of all beads. This is meant to ensure sexual fulfilment (συνουσία, synousía), on the wedding night and during the following honeymoon period. (via https://en.wikipedia.org/wiki/Worry_beads)

Thank you for stopping by! :)

Brock Purdy has his pass deflected and then tips it himself to Mario Goodrich in a wild sequence of events that ends in an 18-yard Clemson touchdown.

Dabo Swinney gets a glorious Cheez-It bath as Clemson seals a 20-13 win over Iowa State in the Cheez-It Bowl.

Brock Purdy completes a pass to Charlie Kolar in the back of the end zone for an easy 6-yard Iowa State touchdown.

Will Shipley follows his blockers and gets to the outside to score an easy 12-yard touchdown to give Clemson a 13-3 lead.

D.J. Uiagalelei rolls out to his right to fire a pass to Beaux Collins that he somehow tips and catches in a crowd of defenders.

Chelsea looked prime to win against Brighton before a late goal by Danny Welbeck doomed them to a 1-1 draw at Stamford Bridge.

Once again, the title is Manchester City's to lose, but this season, they've managed to reinvent themselves and get even better. So what's changed?

Chelsea were imperious for the first 10 months of Thomas Tuchel's reign. The crown has slipped, though, and he needs to figure out why -- fast.

John Madden died on Dec. 28 at the age of 85. We took a look back at how the legendary coach changed the sports we watch -- and how we watch them.

Two years into the COVID-19 pandemic, scouts have adapted to analytics and less travel, while clubs focus on low-risk signings and saving money.

Toronto FC is ready to retool under new manager Bob Bradley with a pair of stars from Serie A. Transfer Talk is LIVE with the latest.